This summer has been more productive than I had imagined. I expected that I would laze around all summer and do nothing. But to my surprise, I actually managed to learn a few things!

To start with, I performed a fresh install of Fedora 22 on my laptop and got rid of Windows. I installed Sublime Text. Apache, MariaDB, PHP and Python followed. Fedora 22 has a cleaner look and feel than earlier versions. I really liked a wallpaper from Ubuntu 14.04 LTS when I was trying it out. So, that went in too. 🙂

I read up on WordPress themes and plugins. I developed a basic WordPress theme from scratch: it was a mix of reading the Codex and stealing from the TwentyFifteen theme; but hey, it works! 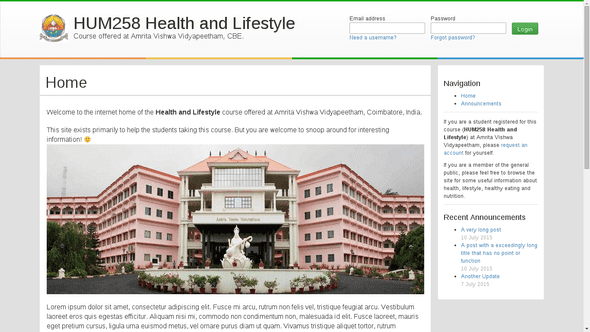 It’s far from complete, and you would facepalm if you looked at the code; but I tried it on a course website that I had developed (as an assignment, I think) a while ago, and it wasn’t too shabby at all. 🙂

Oh, and I just learnt that my blog’s theme automatically capitalizes the ‘p’ if I type WordPress. Neat!

I am reading the Pro Git book, and have started using Github and Bitbucket. And it is life-changing. I have no idea why I didn’t start sooner! I am also making a Git cheatsheet as I progress.

I have wanted to learn Python for a while now. I completed the Python track on Codecademy. I signed up for a Python course on Coursera (An Introduction to Interactive Programming in Python), but dropped out midway when I fell ill. I am already writing little python scripts to make my life easier. Hopefully, they find their way into Github.

I stumbled upon Kivy by accident. It is an amazing cross-platform Python framework. I read up some, and I wrote a simple stopwatch app.

I tried creating a package out of the app using pyinstaller, but the resulting package was huge — which makes Kivy less than ideal if you want to ship stand-alone apps that can run on systems where Python is not available. That being said, it is amazing how easy and simple Kivy is!

SPOJ made me realize how utterly inadequate my programming skills are. Barring a couple of very easy classical problems, I couldn’t get anything right. It was the same-old frustrating case of “It runs on my machine, but it’s not accepted by the judge”.

The goal is to complete at-least a hundred problems by the end of 2015. I plan to read up on common algorithms. A page here to track the progress should be nice.

I set up my aquarium again, and I bred Bettas. I tried my hand at painting, and I started reading again. I also received a shipment of ESP8266 and nRF2401+ modules: there might be a project using them soon.

And oh, did I mention I just wrote a blogpost? 🙂